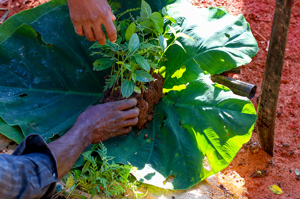 MCC’s forestry, ag work in Desarmes, Haiti, expands and becomes its own organization

PORT-AU-PRINCE, Haiti – For 37 years, the Haitian staff who operated from MCC’s office in the town of Desarmes have walked for miles every day, up mountains and through rivers in Haiti’s Artibonite Department, to work in remote and vulnerable communities.

Konbit Peyizan will continue the work that MCC has been doing since 1982, organizing community groups and training smallholder farmers in sustainable agriculture and forestry techniques so they can increase the productivity of their land and provide for their families. 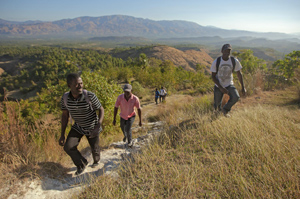 “MCC has focused on the most vulnerable people in the most remote places,” says Jean-Remy Azor, previous program coordinator of MCC’s Desarmes office and now executive director of Konbit Peyizan. Konbit Peyizan has the same mission. We want to go as far as possible to the places where people are the most disadvantaged.“

The staff helped farmers establish tree nurseries, distributed thousands of seedlings every year, and worked with residents to replant entire hillsides that had been decimated by long-term deforestation. 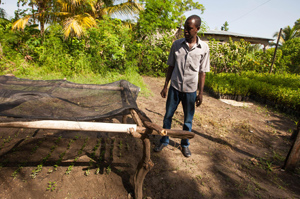 Water systems and hundreds of latrines have been built with staff support. They’ve responded to disasters and are providing environmental, hygiene and peacebuilding education through kids’ clubs.

In April 2019, they’re starting out on a new road: This MCC-run project has become an independent Haitian-led organization, Konbit Peyizan pou Ranfòsman Kapasite Lokal (Agricultural Collective for the Reinforcement of Local Capacity—Konbit Peyizan for short).

Azor, who has worked with MCC for 37 years, was born and raised in Desarmes. He started working for MCC in his early 20s, when MCC hired its first employees in the area. He has overseen MCC’s work in Desarmes as it has expanded from reforestation into peacebuilding, education, public health and nutrition.

The difference these projects have made in this area since 1982 is visible in the thickly forested hillsides and lush kitchen gardens in the communities where MCC has been working. Since 2014, more than 2.3 million trees have been distributed to tree nurseries and families in the area served by MCC in Desarmes. Rates of school attendance—an indicator of overall economic prosperity—in communities where MCC works have been steadily increasing. 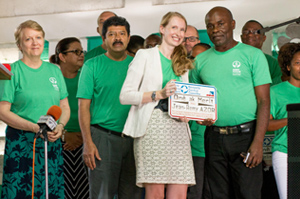 The idea for the Desarmes program to become independent was originally floated over two decades ago, following MCC’s development model that shifted from MCC staff providing direct services to accompaniment of local partner organizations. When work is carried on by local partners, it becomes more sustainable over time, and projects designed and implemented by local leaders are more effective and appropriate to the community, says Rebecca Fast, MCC country representative in Haiti.

Initially, members of the Desarmes team were hesitant to leave behind the security and sustainability of working for an international organization.

Over time, the team’s initial misgivings have turned into confidence, especially after they took on several new projects simultaneously after Hurricane Matthew, all of which were successful. For example, because of the hygiene and sanitation projects implemented by the Desarmes team, the entire commune of Verrettes, the heart of the cholera epidemic, has been free of cholera for more than a year. 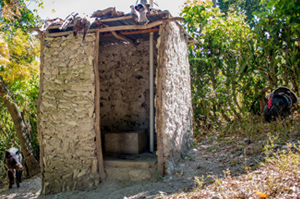 “We recognized that the MCC Desarmes team had the experience, capacity and drive to work as a local organization, Konbit Peyizan,” says Fast. “It has been our honor to walk with them through their path to independence, and to work with them as partners and collaborators in the future. After 60 years of work in Haiti, MCC’s legacy lies in our partners.”

Michelet Elisamar, agroforestry coordinator for Konbit Peyizan, was part of the transition. “The process of reflection and working together [towards independence] has been really beautiful. Even if some of us are still a little unsure, we know we’re not alone.”

Elisamar is right—they’re not alone. During the last three years, MCC has been preparing the Desarmes team for independence. Through this deliberative process, the new organization has created an advisory board and worked with an independent consultant to establish all the legal and financial regulations required to create a strong and healthy new organization in Haiti. 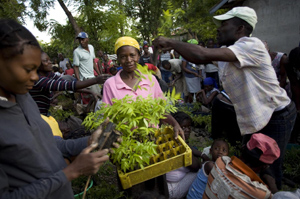 At the same time, the Konbit Peyizan team has been busy reassuring community members and project participants that the formation of the new organization doesn’t mean reforestation and agriculture work in the Desarmes area is coming to an end.

“On the contrary!” Azor tells those who are worried. “We’re simply taking on more responsibility.”

Hope for the future

MCC will continue to work with Konbit Peyizan as a local partner organization, helping them to develop additional supporters and funders and helping them build skills in areas such as finance, planning, monitoring evaluations, donor relations and communications. In its first years of independence, the new organization will implement projects supported by MCC and the Canadian Foodgrains Bank.

Konbit Peyizan will use the grant to expand its work into three of the most remote communities they’ve ever worked in, while nudging communities where they already work toward self-sufficiency. It’s a significant undertaking, but they believe it’s possible because of the strong relationships they’ve built in those communities over the course of their work with MCC, as well as MCC’s continued support.

“The base of our work is training and organization,” says Elisamar. “When we think about the people we train, we know it’s those people that will become the change in their communities.”