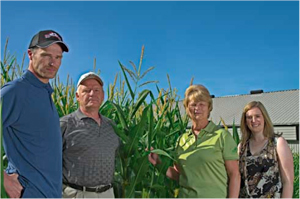 Through sales representatives, notices tucked into invoices and a message on its trucks, an Ontario feed company is inviting farmers to donate to MCC’s account at the Canadian Foodgrains Bank (CFGB).

It’s a unique initiative that gives Wallenstein Feed and Supply, a family business, a way to extend the amount that it gives to MCC — and a way to let customers know how they can make a difference in addressing hunger across the world.

Globally, “a huge percentage of the people who go hungry every year are farmers. Our aim with this effort is to give farmers a tangible way of helping farmers around the world”, says Shelley Abdulla, whose family has run the feed mill for more than half a century.

As business owners and long-time MCC donors, the family was drawn to explore how they could promote MCC within Ontario’s farming community, Abdulla says.

Working with MCC Ontario resource development director Dan Driedger, the company created Grains of Hope. Through this initiative, farmers tend and harvest a crop, donating the proceeds to MCC’s account at CFGB, which is used to support MCC food and water projects around the world. Wallenstein Feed and Supply gives farmers $100 for each acre of land they plant for this effort to help cover their costs. Farmers already have a strong tradition of lending a hand to others in their community. “We just wanted to extend that sense of community to countries that are a whole lot worse off than we are,” Abdulla says.

Last year, the first that Wallenstein Feed and Supply offered this option, 42 farmers took part. Including matching grants from the Canadian International Development Agency, the 174 acres they planted generated more than half a million dollars.

It’s raising awareness as well as money. Driedger has spoken at Wallenstein banquets, telling sales representatives, other company staff and customers about how sand dams, one of the projects supported through CFGB funds, are making a difference in communities in Kenya and Mozambique.

“For MCC,” says Driedger, “it's a wonderful example of how businesses can leverage their role and their market to reach a lot more people than we would ever be able to.”

Ina Drost, middle right, and her son Al, far left, of New Dundee, Ont., are among farmers participating in a Wallenstein Feed and Supply effort to raise money for MCC’s account at the Canadian Foodgrains Bank. Promoting the effort are Wallenstein staff including sales representative Barry Martin and Shelley Abdulla, who leads Wallenstein’s Grains of Hope initiative.